I was lucky enough recently to taste the current releases of Mount Pleasant wine from Australia’s Hunter Valley. With such a wide collection of wines available, this round up has been broken up into two parts.

The second part will focus on the ranges showcasing some of the unique Shiraz parcels from the old Mount Pleasant vineyards.

In 2014, Mount Pleasant released their B-side wines. At first, these experimental wines were a ‘cellar door’ special, however, the label has been popping up in wine stores lately. In these wines the winemakers can release smaller batch wines that don’t fit in the more traditional ‘Hunter Valley’ profile.

This includes wines made from young vines and varieties that are doing well in the region such as the Portuguese red grape Touriga, or the Italian grape Fiano. Or an unusual co-ferment of Shiraz with the grape better known in Cognac, Montils.

There are five wines in this range, here are the three I tasted:

Fiano is an Italian grape that has established itself in Australia over the past decade and now the Hunter Valley Fianos are coming off the ‘cellar door’ only list into mainstream. To give the wine some additional dimension, it has been barrel fermented in old barrels and then kept in these barrels for up to 8 months with some occasional stirring.

This barrel contact has given the wine a roundness and some toasted spice that complements the peach and zingy citrus fruit. The lush texture is heightened by some crisp, sherberty acid. A wine like this is worthy of taking to dinner and can be matched to a dish with a little spiciness such as salt and pepper squid. Just as it will match well with a salad or pasta mixed through with some grilled chicken. (AU$30)

There are more and more red wines from the Portuguese grape Touriga coming to light in the Hunter Valley.  Sometimes blended with that Hunter stalwart, Shiraz. In the TT17, the Touriga Nacional has been blended with 20% Tempranillo. It is not an unusual blend as both are grapes grown in the Douro Valley in Portugal. There Tempranillo is known as Tinta Roriz and can be included, along with Touriga, in the blend destined for fine port.

In this blend however, that touriga carries an intense rosewater perfume that pulls together the cherry, sage, and earthy spice aromas. A rather elegantly styled red wine that is made for enjoying young. The spiced cherry finish is soft and long with some shapely ripe tannins. A very more-ish blend, with or without food! (AU$30)

Out of the three B-side wines that I tasted, this is probably the one that I think needs a little more time to integrate. If you know the grape at all, Montils is probably better known as a white grape that may be used in brandy in the Cognac region. Here it has been added, Cote Rotie style to the more traditional Hunter Valley grape, Shiraz.

It really does add dimension to the aromatic profile and bring alive the scent of peppery raspberry, blueberry, nutmeg and thyme . The palate is shaped by some ripe tannins and the bright cherry flavours extend deep in the finish. If you open a bottle now, I’d make sure I had a juicy steak or some wild boar sausages to accompany it. Otherwise, I’d leave it for 3-5 years. (AU$48)

Throughout the Hunter Valley are old vineyards with prized Semillon vines. The famed Lovedale vineyard was planted by Maurice O’Shea in ’46. Since then, it has become known as one of the best Semillon vineyards in the region. As these revered beauties age, they develop deeper flavours and a softness of texture, a roundness, despite the high acid profile.

This is certainly true from this wine. The zingy lime juice and bright zest is further heightened with a floral prettiness and rounded out with white peach. In its youth, it already shows a softness despite its straight and prominent backbone. An approachable wine now with a couple of years in the bottle. However, this has been made for the long haul if you can wait – decades that is. (AU$75)

Whereas the Mount Pleasant 1946 vines Semillon is made with one eye on the distant future, the Lovedale Semillon is released with a little age on it already. At a time where those sought after lanolin toasted notes just begin to grace the wine. Of course, it will reward some additional mid-term cellaring as well, when those savoury spiced honeyed notes really take hold.

Over these past six years, the zippy lemon and grapefruit depths have gained a smoky honey character as well as those mentioned lanolin notes. That honey will continue to deepen as the wine ages. The acid has become rounder and it has gained a graceful fleshiness in the mouth. It finishes on an extended savoury note. This is a versatile wine that will suit many dishes. Although if I had to choose, it would be a superb match with a fillet of fleshy fish served with some brown butter and flaked almonds.  (AU$70 | UK£39)

Each year Mount Pleasant will release not only the current vintage of Elizabeth, but also a cellar release version such as this.  The cellar release vintage at the moment is 2010.  This is often a remarkably affordable way to get access to an aged Hunter Valley Semillon. At the same time I tasted this wine, I also tasted a 2000 vintage that certainly proved that these wines can be reliable cellar dwellers. The 2000 had developed a waxy, orange peel toastiness that underscored a netley freshness.

2010 was a riper year and the Elizabeth retains some floral highlights to the lemon, apple and honey and toast depths. It has all the elegance that you would expect from an Elizabeth with nearly a decade of cellar time. Softly rounded, with intense apple and citrus flavours that drives long into the sip. That sherberty acid sweeps in and keeps the honeyed development fresh and refined. (AU$28 | £18)

Mount Pleasant has again started to release the non- cellar release, the youthful, version of the Elizabeth with a couple of years in the bottle rather than releasing it in its vintage year. This allows the wine to grow out of its ‘ingénue’ phase. One where it might seem to be less characterful into a wine that is confidently settled into life.

The 2016 Elizabeth is already showing honeyed nuances to its floral grapefruit citrus aromas.  The mouthful takes on a waxy apple finish. There is plenty of fruit intensity that flows along the palate and then lingers. At the moment, this is a wine to enjoy with a plate of oysters or a pear and brie tartlet. (AU$22)

Some of the more unusual Mount Pleasant wines…

The name of this wine ‘Mothervine’ is a reference to the Pinot Noir clone MV6. MV = Mothervine. This clone was brought out from Clos Vougeot by James Busby in December 1831. Maurice O’Shea planted it at Mount Pleasant in 1921 and the vineyard is on original rootstock ie. not grafted. The vineyard has some of the oldest pinot noir vines in Australia and O’Shea used to blend these grapes into his Shiraz.

It is an elegant pinot with raspberry, cherry fruit aplenty tempered by an exotic spice blend and some earthiness. The old vines give a soft suppleness to the tannins.  The fruit finishes with a sprinkle of fresh parsley. This wine is not only a remarkable snapshot of this grape’s history in Australia. It is also very drinkable now. Alternatively it is a good cellar candidate. (AU$35)

Maurice O’Shea started this peculiar Hunter Valley blend and it is one that does tend to capture the imagination. The Mount Pleasant winemaking team add a slug of around 30% pinot noir to some shiraz off the Rosehill vineyard.

The shiraz from the Rosehill vineyard always seems to have a prettiness to it. While this is still apparent, the addition of pinot just adds a cherry fruit and dried thyme boost and texture. The rich fruit has a brightness and an elegance that makes it very approachable to drink now. However, it is a wine that will continue to meld together for at least a decade, maybe two, in the future. (AU$35)

The next part of this vintage run down will include many of the Shiraz wines that Mount Pleasant is renowned for . 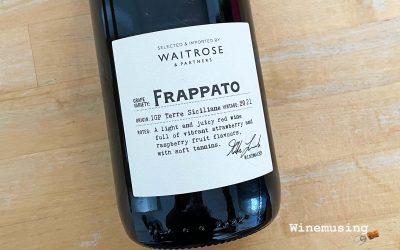 Who makes it? Waitrose ‘Lost and Found’ Frappato is a Waitrose own label wine. Frappato is one of Sicily’s native red wine grapes. It is known for maker lighter bodied red wines. Of course, lovers of Cerasuolo di Vittoria may know it as a component of that wine when...

Who makes it? Champagne Brimoncourt is still a relatively new Champagne maker with a history. You can read more about its history here in Brimoncourt, France's new Champagne House has its roots in history. However, the brand is one that is not ‘new’ but newly...